In this section, I will be sharing the process I used to set-up the environment to monitor and visualize network traffic. The section will include a simulated procurement process to select the right tool based on a defined criteria.  The primary use-case will be to understand the network traffic across the three nodes within the virtual environment. The traffic will be evaluated in packets, bytes, bandwidth, latency, responsiveness and the CPU use of hosts (Tittle & Lindrose, 2017). In addition to functional requirements; ease-of-use and ease-of-installation will be included in the criteria.  ​The criteria I used to select the network visualization tool for my lab environment was based on a number of factors that would ensure I could monitor the network for performance, traffic usage, faults and availability. This tool needs to monitor the network end-to-end for my topology (see Appendix A – Network Topology). This consists of a Host running a virtual environment with three nodes, each running a specific operating system and application.
​Review and Evaluate Network Visualization Tools
I researched and evaluated the following three network monitoring and visualization tools:
All three tools made the short-list of at least a dozen others that I reviewed and claim to support the area of “Network Monitoring” or “Network Visualization” tools. Interestingly, a class of business reporting tools also use the moniker of “network visualization” but they are generally used for peer-to-peer network reporting and analysis versus IT network monitoring.  These tools included; Gephi, Data Wrapper, Charted and DyGraphs. All are opensource but designed to be used for business intelligence applications.  Table 1 below provides an initial summary of the each of the three tools along with a cursory analysis of Pro’s and Con’s based on research.
Table 1 – Summary of Selected Network Visualization Tool
Wireshark appears to be the dominant tool given the number of online instructional videos and search results. It is clear that it has been well tested in the field and continues to improve with its large following. The second tool I evaluated was ntopng.  This is a complete re-write from its predecessor ntop.  Ntop was effectively obsolete for a number of reasons; Its original LAN-oriented design prevented ntop from handling more than a few hundred Mbit, the GUI was an old (written in 1998), could not be used as web-less monitoring engine to be integrated with other applications and finally, many components written in 1998 and lots of spaghetti code.
​
Ntopng addressed many of limitations of ntop through a complete re-write of the code, new UI standards (HTML 5) and real-time processing of traffic. One of the main improvements was to the architecture.  Ntopng moved from a monolith, closed architecture to three different and self-contained components, communicating with clean API calls. See Figure 2 below (Deri, 2015).
Figure 2 – ntopng Upgraded Architecture

There are use-cases where Wireshark and ntopng can work together. Specifically, Wireshark has been traditionally used for in-depth packet analysis; while Wireshark cannot be used as a long-term, permanent monitoring tool, but rather as a tool used to analyze specific issues. The proposed use-case would use Wireshark for in-depth packet analysis and ntopng to handle permanent monitoring.
​
Cacti is a tool with great graphics, however, I immediately disqualified it due to the risk and hassle to install it on my working CentOS environment.  Quite simply, I “chickened-out”.  I had everything working perfectly in my lab environment with Wireshark and ntopng monitoring traffic on all three nodes.  In addition to the concerns regarding the immediate installation requirements, it lacked some features that I suspected I may need like SNMP monitoring and the ability to interrogate the data directly against an RDBMS system.  Therefore, I put this on pause for the near-term and will consider revisiting in the future as it does appear to be a viable solution.
Selection of the Network Visualization Tool
The approach I took to this assignment was that of a request for proposal (RFP).  I did this to ensure an objective analysis of the different packages against a pre-determined set of requirements. Each requirement has a relative weight of importance and received a score from 1 to 5 based on my evaluation of the tool across the following four areas; functionality, OS compatibility, ease-of-installation and finally, ease-of-use.  The weighting is important because I needed to make sure the areas of installation and user interface were well represented given the short time-period of this assignment and course.  Therefore, I placed a significant weight on the above two factors. However, in a production environment these factors would likely not receive as high of a weight and more weight would be allocated to functionality.
​
Table 3 below is the RFP that I designed to evaluate the three tools.  I did not install Cacti and therefore, it does not have a score.  Although Wireshark achieved a slightly higher overall score in this evaluation criteria (4.75 vs 4.55), I decided to pursue ntopng for the remainder of the assignment.  Primarily due to the fact I invested a fair amount of time to install it and it appeared to have a rich UI to assist in my overall understanding of the tool and concepts.
Table 3 – RFP used in the Evaluation Criteria 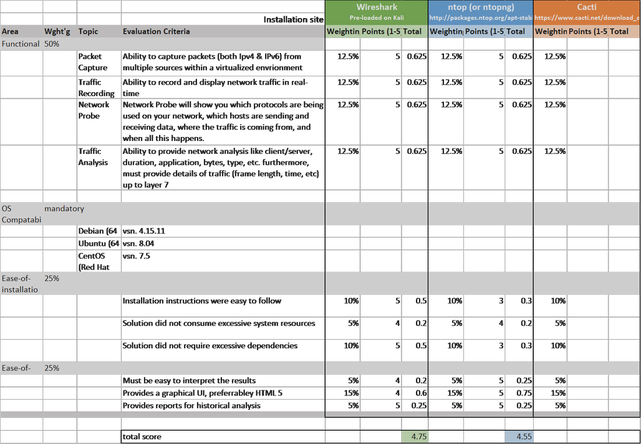 Let's say a heartbeat message with a payload_length of 65535, ie: a heartbeat with a 64KB payload, the maximum possible, is received. The code has to send back a copy of the incoming HeartbeatMessage, so it allocates a buffer big enough to hold the 64KB payload plus one byte to store the message type, two bytes to store the payload length, and some padding bytes, as per the above structure.  It constructs the reply HeartbeatMessage structure with the following code, where bp is a pointer to the start of the reply HeartbeatMessage:
ntopng Installation Process
I needed to first check the compatibility of the OS versions in my VM to make sure the tools would be compatible.  I did this with the following commands (see Appendix A – Lab Notes), summarized in the table below.
Once the versions of the OS were known, I simply followed the directions I found for installing ntopng.  I originally attempted to install this on the Kali Linux node.  I ran into problems with this and decided to install on the WebGoat node using the CentOS operating system instructions.  This was nearly flawless. Table 4 below provides the steps and commands.
Table 4 – ntopng Installation Process (requirements – CentOS vsn 7)
Figure 5 – Screen shot of login – Success 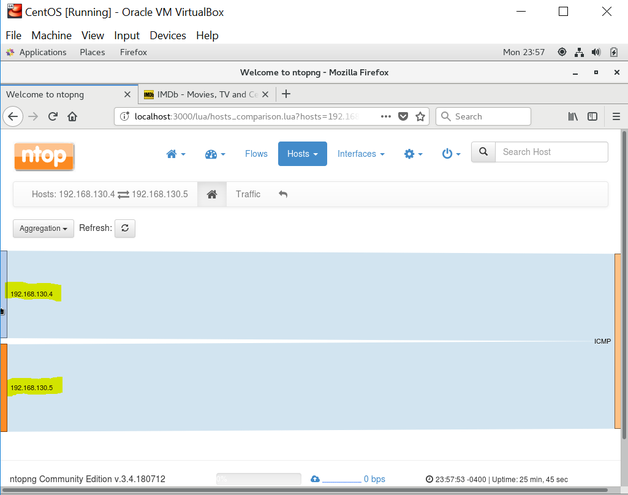 Capture Log Data
I simply opened each VM and used the ping command to hit each VM node.  this command sent 56bytes of data to the CentOS node and received 64byte packet in return to acknowledge the communication. See figure 6. Figure 7 shows the view in ntopng. Additionally, both the Kali and the CentOS nodes have an additional network adapter assigned to them (NAT) to allow each to contact the internet.  As a part of the experiment, I toggled between network adapters to view the network traffic.
Figure 6 – Ping from Kali Linux Node 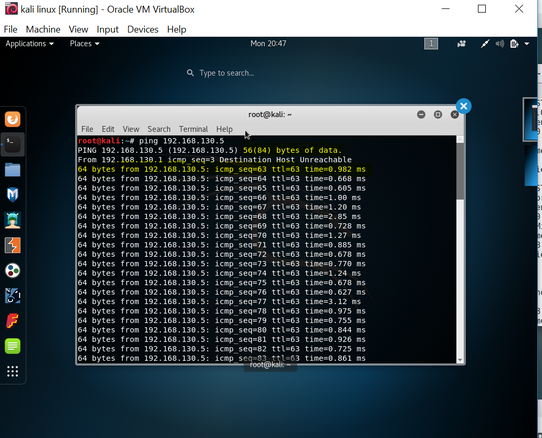